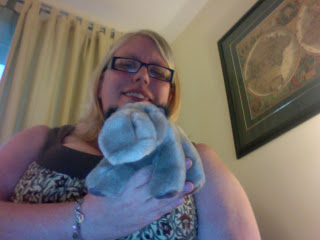 HERBERT the hippo! My awesome friends Terry and Kathryn got me a hippo friend and he's a telus hippo :D which makes him even cooler. So I have a new monthly goal to craft Herbert a monthly wardrobe.
I needed something positive today since my sale pretty much fell apart here, they didn't get their financing, they didn't do their inspection and so I'm back to house showing. The hardest part of this was that I could do nothing about this so I just had to sit back and let it happen but it was on and off for the last few days which was even harder than just them saying no.
On the positive side I got the apartment I wanted in Regina so next week I'll be talking to movers and setting up/closing down utilities. I did the google street-view of my new neighborhood, I live on top of a used bookstore, an ethiopian restaurant and the schizophrenia center. I will be a block from a 7 eleven and a 24 hour shoppers drug mart. The bus stop is just outside my door for the bus to the university. So I'm pretty psyched there are also lots of hotels in the downtown core just blocks away so you have a place to stay if you come visit.
I also got my invite to the mature student orientation event which is an evening of dessert and cocktails with a campus tour. I'm excited to go and meet some people and no frisbees or beer in sight. After they tried to put me in dorms i was a little worried that they didn't consider me a mature student but thankfully I am so I can hopefully find a niche and a few new people to meet.

sorry about your sale falling through but I have faith that your house will sell!
Your new neighbourhood sounds ecclectic and interesting: bookstore - awesome
Ethiopian resaurant - Falvourful
Schizophrenia centre - ecclectic!
(I laughed out loud for that one)
Michelle Shimenosky

Sites that inspire me